Swedish House Mafia make a massive return with landmark debut album, Paradise Again, just when the industry needed them the most.

Paradise Again is a decade in the making, and returns after the iconic trio split up and focused on their own solo efforts. While each of their own projects have become staples in modern electronic music, they all sonically discovered themselves and knew that a comeback was imminent.

With collaborations with The Weeknd, Mapei, and Ty Dolla $ign, Swedish House Mafia’s Paradise Again opens the doors for a detailed retracing. The album is certainly dark in nature, but it’s also an homage to their legendary past.

“Time” opens Paradise Again with an infectious deep house drop with Mapei’s piercing vocals. “Heaven Takes You Home” with Connie Constance and “Jacob’s Note” with Jacob Mühlrad follow. The Weeknd stops by and ups the ante with “Moth To A Flame,” which was released earlier this year.

“There’s always new ground to break,” said Angello in a press release shared with EDM.com. “However, the biggest challenge was to do what nobody expected us to. We needed to find sounds in the studio we had never heard before and were excited about. It’s super inspiring for me to be in a band where we actually want to challenge ourselves. This is definitely one of the most exciting times for us, because we’re having fun like 15-year-olds again.”

Swedish House Mafia’s new sonic direction has set the tone for an impeccable future for the legendary dance group. It’s almost certain that they will continue to be a hot commodity for years to come, with shape-shifting tracks like “Don’t You Worry Child,” “One,” and “Save The World” just around the corner. 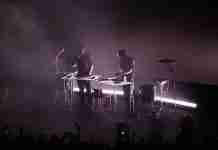