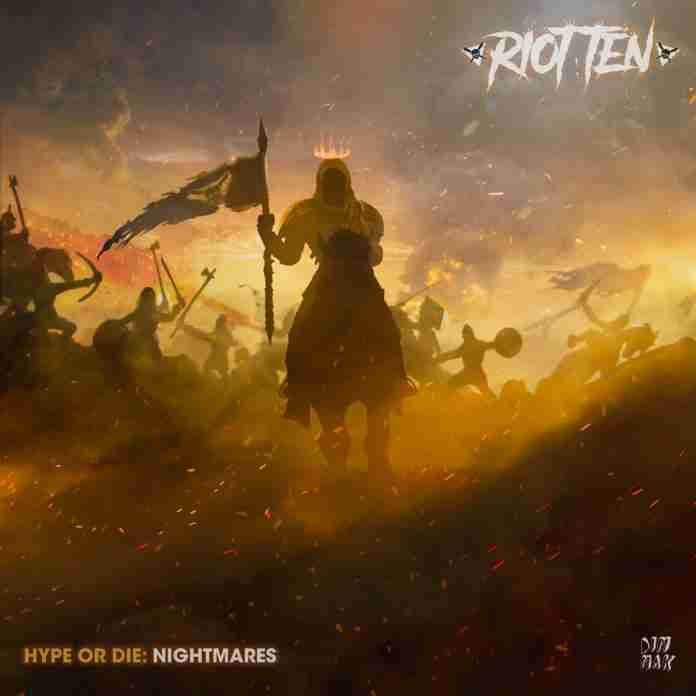 Riot Ten has teased his debut album Hype Or Die: Nightmares for a few weeks now. Recently, he shared his collaboration with SAYMYNAME on “Glocks.” This worthy album from an impeccable talent is now available on Dim Mak Records.

With collaborations with artists like YDG, Throwdown, Titus, and more, Riot Ten packs this album with a ferocious punch. A plethora of bass genres purge through this album, and there’s very little time for the listener to regather themselves between tracks before the next delivers an unexpected blow. With “Mayhem (Intro)” beginning the album, it perfectly sets the mood and attitude for what’s to come. The pre-released “Glocks” with SAYMYNAME, which features Milano The Don, continues the madness into the second track, while YDG moves in for the third track “Hyphy.”

The mayhem continues to ensue as Riot Ten gets “Freaky” with WhooKilledKenny, which drives the line of heavy hip-hop. He powers through the rest of the album and closes out with a creepy title track “Nightmares (Alone In The Dark).” This slow-paced track cools down your innards and ear drums to assist in the closeout of the album. It’s beautifully written and completely unexpected from anything that Riot Ten produced for the rest of the album.

“This album is literally who I am as a musician,” states Riot Ten. “It means everything to me. I’ve put out countless EP’s over the last three years, way too many singles to even count, so to finally deliver a full-length album is a defining moment for my career and growth as an artist. This album will showcase my roots, as well as my energy, and I can’t wait to share it with the world.”

Shortly after the shooting in Riot Ten’s hometown of El Paso, Texas, and another in Dayton, Ohio, he organized a charity show in El Paso to support the victims and their families. With his charity show he raised $20,000, which was donated to those affected by the devastating shootings. Additionally, he organized his very own festival for the first time in El Paso.

He’s currently on tour to celebrate the release of this album and will end in Australia around the new year in 2020. The tour is accompanied by bass music favorites, including GG MAGREE, Delta Heavy, Sharps, Stoutty, Yakz, and others on select dates.