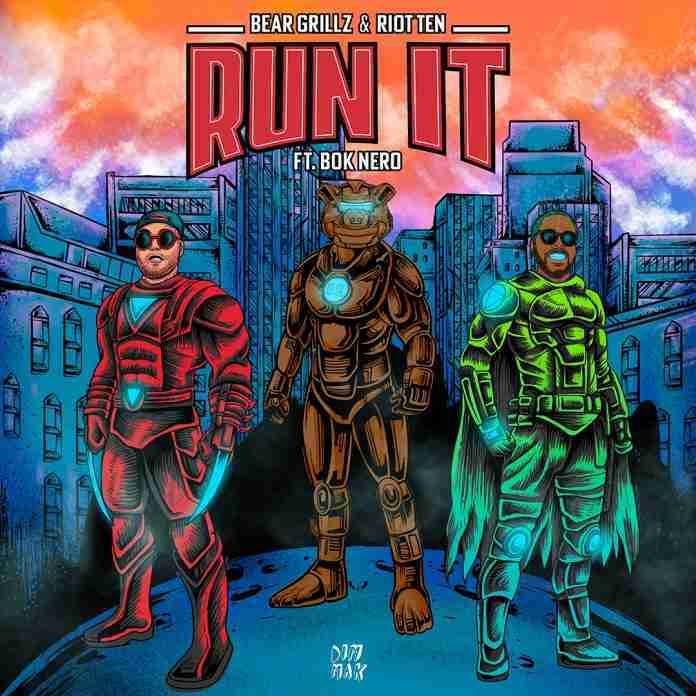 ‘Run It’ is Bear Grillz’s latest release ahead of his highly anticipating forthcoming album ‘Friends: The Album’ on Dim Mak Records. And he’s tagged Riot Ten and Bok Nero to up the ante.

Bear Grillz and Riot Ten are a few of bass music‘s headlining acts. They’re both known in the scene to drop grueling, relentless, and gut-punching tunes that are enough to start a mosh pit on any dance floor. This collaboration on “Run It” between the two bass gurus with Bok Nero on vocals is certainly no exception.

“Run It” immediately opens with Bok Nero’s #HoodEDM vocals. They keep the production heavy underneath the vocals with distant and atmospheric synths lingering. The drop is grueling in its own right, so don’t let yourself go too far before it hits. You’ll need the time to prepare. During this monstrous drop, Bear Grillz and Riot Ten keep it ear-pleasing with screeching synths, bottomless basses, and an unforgettable slamming percussion section. It’s clear that nobody gives a f**k in this track and that’s for the better of the listener.

Bear Grillz and Riot Ten have been friends for years, but ‘Run It’ is their first ever collaboration together.

The two producers have been friends for nearly six years, but they’ve never collaborated on a project until now. They’ve superbly blended their talents together into a smashing two-and-a-half minute bass masterpiece, and they’re proving to be a force to be reckoned with.

“I’ve known Riot Ten since 2014,” states Bear Grillz in a press release. “So I’m stoked we finally got to work together on a track and bring Bok Nero as well.”

Riot Ten adds: “Bear Grillz and I have been friends for so long now and have talked about working together since day one. He sent me an idea, and I instantly knew what I could do with it. I think it’s the perfect blend of both our styles, and Bok Nero always throws down great vocals.”

Bok Nero’s #HoodEDM lyrics and style has landed him collaborations with other bass moguls like Zomboy, Steve Aoki, and Shizz Lo.

“I work out to the lyrics,” adds Bok Nero. “It motivates me to get up, get out, and chase the bag. Tomorrow ain’t promised, but we got right now so run it up!”