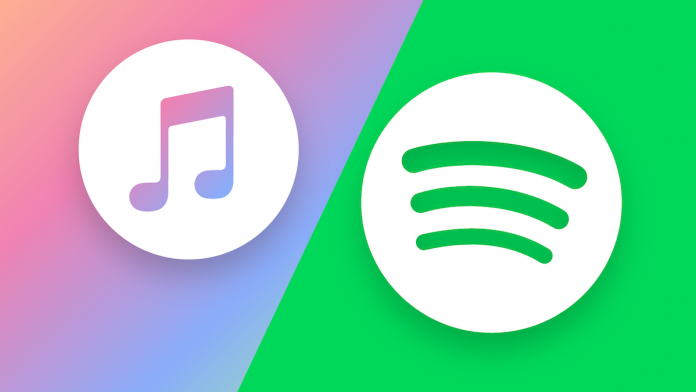 There are a number of online music streaming services available: TIDAL, YouTube Music, Amazon Music, Deezer, Spotify, and Apple Music. Each platform offers unique features and qualities that claim to make it better than the other. TIDAL, for example, offers high quality lossless streaming WAV files while Spotify props itself up with an unparalleled music discovery algorithm.

Apple recently launched its lossless high fidelity audio streaming, but it can’t necessarily be used unless you have the proper hardware.

I have been an Apple user for nearly 15 years. I remember years ago when my uncle would buy my brothers and I iTunes gift cards so we could buy music and games on our iPods. I know the music services side of Apple very well.

When Spotify launched in 2011, I remember downloading the application and giving it a whirl. I didn’t quite understand its purpose, though, because I was so embedded into the iTunes ecosystem. Spotify didn’t give me any reasons to switch, but times have surely changed. They’ve since really upped their game in a number of areas and have really got me thinking.

There are certainly areas where each fall short, and since I’m so embedded into the Apple ecosystem it’s difficult to just pull the trigger and switch. Apple has also got me reeled in with their family plan of Apple One.

With Apple being such a massive and profitable company, they sure do have a lot of kinks in their application.

Yes, a lot. According to Business of Apps, Apple Music boasts more than 72 million users in 2020. They also have more than 75 million tracks available on the service (except for the ones I want to listen to).

I listen to a lot of very niche eurodance music. Bootlegs are fruitful in this community. It’s oftentimes very difficult to find the original audio file (and ripping from YouTube is illegal and severely crushes the quality of the audio). The music is quite big in Europe in countries like Poland, Slovakia, Germany, Netherlands, and Sweden. There are a number of tunes that just don’t make it over to this side of the pond.

There’s a lot of music on Spotify that’s not on Apple Music, and vice-versa.

Recently I was listening to DJ Manian’s Hands Up Forever album and there was a track called “Speed Of Light” with Jorg Schmid that I wanted to add to my Apple library. But I couldn’t find it on Apple Music anywhere. It was available on Spotify, though.

I thought this was weird and did some digging. I searched the album on Google and boom. It was available (yay)!

So, I clicked the “Open in Music” in the top left corner and it opened the album in the Apple Music desktop application. But it told me that this album wasn’t available any longer and began to “play” each track, albeit very quickly with no sound. Once the tracks starting playing I can’t pause them. I either have to quit Apple Music or let them shuffle through, one by one. It even caused my computer to restart one time.

Why is this album showing and playing on Spotify but not Apple Music?

It can get complicated, but the quick and easy response is: The copyright owner (i.e. the label in this case) has stripped it down from Apple Music in the US for whatever reason. This could be a contractual issue between Manian and the label; a distribution fluke; Apple Music and the label/distributor couldn’t come to an agreement for royalty rates; or the label simply just doesn’t want the album available in the US.

The hands up and hard dance genres aren’t huge in the US, but they are growing in popularity. Maybe it wasn’t worth anyone’s time to keep the album up on Apple Music in the US.

I don’t know. I can speculate all I want, but I know it’s not available in the US.

The bigger question for me though is, what’s with the false hope, Apple?

Searching Hands Up Forever in the Apple Music desktop application brings up nothing. Searching on Google shows that it is available. This is not the first time this has happened to me. It has also happened to me with the TechnoBase.fm Vol. 24 compilation album. However, if I remember correctly, this album was released almost exclusively as a CD and only in specific countries.

I will update this article if/when I discover others. Leave a comment if this has happened to you.

Spotify’s playlists are leaps and bounds better than Apple’s.

Spotify’s algorithm is one of the most chased after in the music streaming space. Everybody wants to get on an official Spotify playlist, but they’re not easy to obtain. And Spotify does a good job at keeping their editors tucked away and difficult to reach.

The platform does an amazing job at playlist curation. They seem to be able to create a unique and nostalgic playlist for everything in your life, including road trips.

Their Discover Weekly playlists that artists and fans around the globe look forward to every week. Algorithmic playlists curate a playlist of music that it thinks you’ll enjoy based on your listening history. Their Wrapped feature is a yearly thing that shows the total amount of tracks, minutes, and who your favorite artists were for the year.

They’re going so far to suggest music based on your emotions. Sad? Here’s a sad and lonely playlist. Overjoyed for a new job? Here’s a celebratory playlist with upbeat and happy tunes.

Apple does have some really good playlists, but I just don’t view them the same way I view Spotify’s.

Musicians chase after Spotify’s playlists more than Apple’s. Why?

The algorithm. Between Spotify’s algorithm very strategically placing tunes into curated playlists you listen to and their editors, artists are always looking for ways they can hack the algorithm and become more higher favored in it.

This turns out to be a much better experience for the end users. Spotify’s playlists are ones that do the heavy lifting (and do it well) for you, whereas Apple Music’s playlists just… exist. They’re not prime on music discovery–at least in my personal experience.

Apple Music’s desktop user interface is much buggier than Spotify’s.

Spotify’s desktop interface is incredibly intuitive. The search function is phenomenal, and I can almost always find what I’m looking for. On the other hand, Apple’s search functionality is, again, a bit buggy.

I’m never sure where I need to go to search their entire database of 75 million+ tracks. It has gotten better, and I think I’ve got the hang of it. This whole functionality could just be user error (wouldn’t be the first or last time).

I much prefer Apple Music’s mobile application than Spotify’s.

This is most likely because I’ve become very familiar with the Apple ecosystem over the years. I also really like how Apple has merged my existing library and my Apple Music library. Apple has done a great job here.

I think my hesitation to fully use Spotify’s mobile application is because of my embracing of everything Apple. When I’m listening to music on my phone, I often know exactly which song it is that I want. Apple Music has made it very easy for me to find the tune, album, or artist that I want to listen to.

Personally, I feel like Spotify’s “let me help you discover new music” is too much in mobile. I love this on Spotify’s desktop application, though, because I much prefer to use Spotify when I’m writing and just need some background music. I love their peaceful piano playlist.

Apple has a much higher sound quality than Spotify. The highest quality streaming you can receive through Spotify is 320kbps MP3 files. Which is a bit upsetting for a premiere music streaming platform. The average listener would never be able to tell the difference between that and their free tier of an abysmal 128kbps.

The louder the better… so Apple.

In the dance music space every artist is competing in the “loudness wars.” The louder your track the better it’s going to sound. This is clearly not true, but music that is louder to the human ear is perceived as “better.”

In my own experience I have found that Apple’s 256kbps AAC file is cleaner, punchier, crisper, and louder. Is it better sounding than Spotify? I think so.

I haven’t put my finger on it just yet, but I’ve always found Apple’s sound quality to be superior.

Try it for yourself. Listen to the same track on Spotify and then Apple Music. Which one do you think is louder or higher quality?

So, which one’s the best?

Like everything else, it depends. These are just a few things that I have found by using them over the past few years. Apple has done an amazing job integrating their services with one another. They’ve always provided pristine quality for everything across all of their products and services.

Spotify has a very complex algorithm and prides itself on musical discovery. So whether you’re in the mood to listen to something very specific or to discover something totally new, Spotify might be a better option.

Both platforms do one thing well: allow you to listen to music.

Music collaboration strategies: How to find, contact and work with other musicians easily

79 best hands up and hard dance songs ever released

79 best hands up and hard dance songs ever released